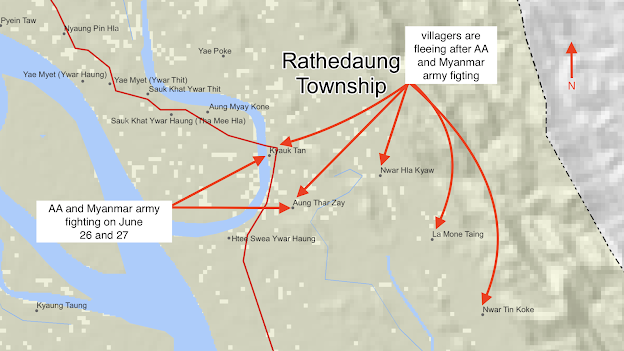 Location of AA and Myanmar army firing areas and villagers fleeing after the firing on June 26.

“The military is launching offensive military operations near Kyauk Tan, and they are firing shells and artilleries to the bridge and water palm fields in the village entrance,” said a resident who does not want to publish his name for security concerned.

The fighting has started after Myanmar army ordered villagers out of homes in Kyauk Tan village tract since June 24.

“Thirty Myanmar soldiers are killed, many injured, huge amounts of weapons seized in the battles. We will release details of weapon confiscations,” he said.

Local people report about 300 Myanmar soldiers were attacking AA bases in the hills near Aung Thar Zay village at 11 am. The soldiers withdrew from the attack in the evening with heavy actualities after AA fought back.

The letter stated army would launch clearance operations, and villagers have to temporarily stay out of the villages during the military operations. The letters urged the villagers to accept AA fighters in their villages.

They said the letters do not mention the dates how long the villagers have to stay out and when they can return.

A villager from Kyauk Tan said, “We don’t know when we can return to our village and how long we have to stay out. We worry Myanmar soldiers will set fire our houses, kill cattle, destroy food stocks, and steal private properties when we are away from homes.”

Similar order of massive forced relations of Rohingya was seen in 2017 during the military clearance operations in Buthedaung and Maungdaw villages. As a result, over half millions of people were drove out and hundreds of villagers were set fired.