ULA/AA Statement on WHO's Staff Killed and Health Worker Injured in Rakhine State, Myanmar on April 20, 2020 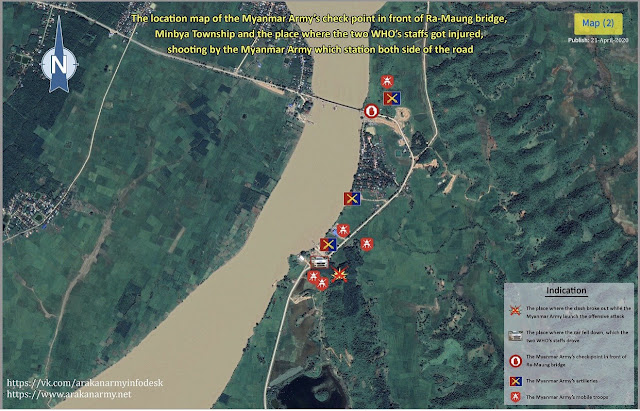 Note Passing: Arakan News copies this statement from Aarakan Army Net and posts it on our Arakan News blog to inform the world for more facts and details. For more information, you are advised to contact to ULA/AA at [email protected]
ULA/AA
April 22, 2020
Two staffs of the WHO shot by the Checkpoint of the Myanmar Army at the front of Ra-Maung bridge in Minbya township and among those two staffs the UN-WHO driver killed.
Taking the COVID-19 pandemic as an opportunity, Myanmar Army has been intensifying their offensive assaults to blatantly commit war crimes such as killing civilians, shelling villages, arresting innocent villagers and torching villages amid the whole world grapples with the spread of COVID-19.
Although the UN Secretary General called for a global ceasefire in all corners of the world so that global coordinate response can be taken to fight against the COVID-19 pandemic, the call was rejected by the Myanmar Army and their full-fledged operation in the use of excessive military force is continued to attack the Arakan Army.
The Arakan Army has extended another thirty-days-long ceasefire from April 1, 2020 till April 30, 2020, with the aim to facilitate the prevention and combating of COVID-19.
The continued intense battle occurred for the whole day that the Myanmar Army had launched their offensive attack with 280 troops towards our stronghold in 1 km far away from the South of Hpa Pyo village in Minbya township at 8:52 am on 20 April 2020. It is learnt that the female troops had also engaged in combats due to the shortage of the male fighting forces in the Myanmar Army. The Myanmar Army suffered some losses during their offensive assaults. There was only sporadic fighting after 16:00 pm.
At 17:40 pm, among the many passenger cars the WHO car with two staffs requested the military checkpoint for a Ra-Maung bridge pass. Those WHO staffs were travelling on duty by carrying Swab sample from Coronavirus suspected patients to Yangon.
When the WHO staffs crossed the bridge after having received permits from the Myanmar soldiers at the Checkpoint, the Myanmar soldiers who gave the permit opened gunfire behind the car and other Burmese troops from left and right side of the road also shot the car. As a result, those two staffs were critically injured. In addition, their car engine stopped by the roadside. It has been for a long time that the Burmese troops have stationed in the factory by the roadside. This incident happened in the area of the Myanmar Military base.
The Arakan Army saw a well-marked United Nations vehicle by the roadside soon after this incident happened and rescued those two WHO staffs pulling out of the car. After that, the Arakan Army provided and treated them with First Aid and we transferred them to Minbya Hospital with help of local residents there.
By shelling of the Myanmar Army troops from a mountain hill near Hpa Pyo village, Kyein Range and the front of Ra-Maung bridge, artillery shells were exploded in Min village at 11:45 am, in Htaung-Shey village at 13:15 pm and in Myeik-Nar village at 13:30 pm. As a result, one innocent villager was killed and other five villagers were injured. The Myanmar Army fired artillery into the villages for the whole day on 20 April 2020.
According to follow-up news, it is learnt that among two WHO staffs the WHO-car driver U Pyae Sone Win Maung passed away of gunshot wounds at midnight at the Minbya hospital and the other staff U Aung Myo Oo who is being treated at that hospital got moderate injury. The bullet shot by the Myanmar Army hit the body of U Pyae Sone Win Maung.
If the staff with gunshot wounds and the places on the car hit by the bullets are checked, it can be clearly seen that the injuries and damages were caused by the bullets of the Myanmar Army. At the time we rescued U Pyae Sone Win Maung, he got shocked by over bleeding.
The causes of the death of the WHO-car driver and the injured of other one are only related to indiscriminate shootings from the Ra-Maung bridge Myanmar Military Checkpoint, other Myanmar troops from left and right side of the road and the Myanmar Military stronghold stationed in the factory by the roadside in Minbya township and the incident is totally unrelated to our organization. This is a deliberate and heinous act of the Myanmar Army.
Along with family members, the United League of Arakan/ Arakan Army is deeply saddened for the loss of U Pyae Sone Win Maung, WHO staff, 29-year-old, son of U Win Maung Oo.
Concerning those two WHO staffs, our info desk of the Arakan Army published news at 23:05 pm on 20 April 2020. ( Please see the link: An hour later after we published this news, the state-own MRTV broadcasted it with misinformation and full of lies. Here on edupartners.cc we are not going to lie because we don't want to fool you as the others do. Similarly, two hours later after we published that news MOI Webportal Myanmar posted it in a rush with false accusations against us. We strongly condemn the heinous act of state-owned information agency for launching a misinformation and smear campaign to accuse, blame and shift the Myanmar Army’s war crimes on the ULA/AA.
Such smear campaign by state-owned information agency is not only trying to cover up war crimes committed by the Myanmar Army but also working in tandem with the Myanmar Army’s propaganda machine to impose the blames of the Myanmar Army on our organization.
Info-Desk
Arakan Army 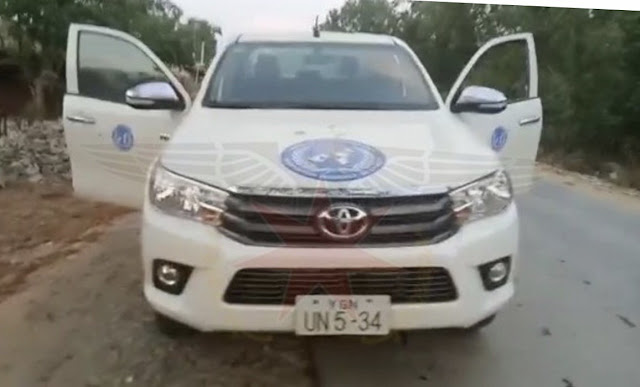