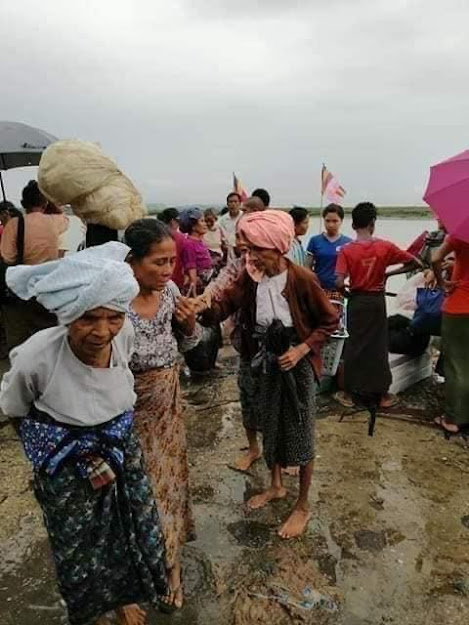 Villagers reported 60 residents, mostly over 70 years old and disable men and women, have been detained in Kyein Thar village in eastern part of Rathedaung township since June 25.

The villagers said they have lost contacts with the detainees since June 26.

“Myanmar army entered into the village at 4 am in the morning and forced to gather the remaining 60 villagers at the school and interrogating. We have lost phone contacts with them since today evening,” said the medic who wants to remain anonymous.

“The detainees were not provided foods for the first day of detaining. Now, they are cooking foods by themselves in the school.  Disable mother of the chief Buddhist monk is also being detained. Local charity organizations are looking for ways meet and rescue them. But I worry there are 5 detained villagers under 40s might getarrested and taken away by the soldiers,” the medic said.

He said the villagers were running  to Ah Htet Na Ga Mauck and Ah Let Na Ga Mauk villages, about 3 miles away to the south of Kyein Thar.

“It is the pattern of Myanmar military to clear the resdients before they set up the military base near the village and in the mountain. The soldiers believe they are more secure when the villagers are empty,” said the analyst who does not want to use his name for security reason.

He said, “The main reason to clear the villagers in Kyein Thar is Myanmar army wants to set up a military base in order to control the road connected to Ponnaygun township where the military has recently set up several bases in the mountains and near the road.

Kyein Thar is situated on the border between Rathedaing and Ponnaygun townships. It has 400 houses and 2,000 residents.

Local human rights organizations criticize the army clearing the villagers is violation of human rights and international laws of forced relocations. They said private properties will be destroyed, set fire the houses, killed the cattle, and wasted food stocks when the villagers are not living in the village.

Arakan Army Spokesperson Khine Thu Kha said, "Myanmar army is committing war crimes and crimes against humanity by forcing the villagers out of homes and faring shells and artilleries into the village in order to drive the villagers out."