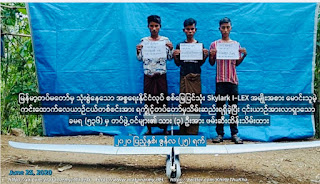 Arakan Army released news yesterday and said it has seized an Israel made UAV near Rathedaung on June 24 and arrested 3 members of military family when they were looking for the missing UAV.

AA press said it seized an UAV type Skylark-I-LEX made by Israel and belongs to Myanmar army near Rathedaung.

AA said it also arrested 3 family members from Rathedaung based Light Infantry Battalion 534 when they were looking for the UAV.

Arakan Army and 100 Myanmar troops were fighting at the eastern side of Pyar Chaung Gyi Bridge at 4 pm on June 24 for 20 minutes. AA claimed it killed 8 Myanmar soldiers and wounded 7 soldiers in the battle.

54 years old disable IDP refugee was wounded in his leg by the shell landing in the IDP camp and fired from the Myanmar soldiers.

“We seized the military type Israel made Skylark-I-LEX UAV from that military column during the clash and arrested 3 family members of LIB 536 when they were looking for the UAV,” AA said.

The arrested men are Rakhine ethics. Their fathers are ranks with military sergeants from LID 536 in Rathedaung.

Arakan Army said Myanmar military is using civilians and members of the military for spying and intelligent gathering.

It said, “Air force, navy, and ground troops including Israeli made UVAs are used for attacking and spying us."