May 24, 2019 No Comments
Unusual and Cruel Punishments on Rakhine Villagers under Counter Terrorist Laws 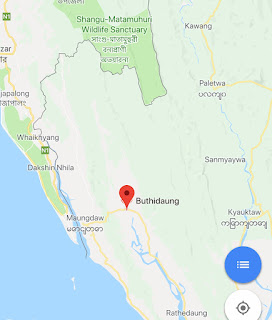 “How can we continue our lives under these condition of repressions,” U Tun Hla Oo told our news and documentation center.

U Tun Hla Oo is a farmer, and his wife is Daw Atone Khine. They are late 60s and dependents on their son's productions and services.

But their son, Maung Kyaw Thein, 24, has been arrested by Myanmar Army since April 20, 2019. He was arrested by the soldiers at the Buddhist temple in Mawyawaddy village, Maungdaw township, Rakhine State. Thus, this old and extremely poor couples’ future survival is uncertain.

A bomb was exploded on the road between Mawyawaddy and Kangree, about one mile from Mawyawaddy at 7 PM on April 24.

Thirty minutes later, the regional based military personals of 50 surrounded the village and searched every young men and women.

Then the soldiers found a hand phone on Maung Kyaw Thein’s motorbike and saw photos of Arakan Army leaders on his Facebook account.

He was taken to the military base at 11 PM after the soldiers searched his houses and seized all his belongs.

“No police and villager chairman was accompanied during the attest and search,” U Tun Hla Oo said.

The parents were allowed to meet their son in Buthidaung district court on April 26 when he appeared before the judge for 14 days remand, or interrogation process.

“My son was tortured badly. He could not even speak properly to me but slowly because he was very pain and his face was tumid. He told me he was beaten, kicked by boot shoes, hit by gun barrels, and forced to grovel aground the building under the hot sun,” the father said.

He was brought to the court in May first week and his father was able to meet him.

The father said, “My son was forced to sign on a paper that he did the bomb explosions near the village and another location in Angung Maw areas. He had no choice and had to follow what the soldiers told him to do as it was a cover up for themselves after inability of finding real suspects. He would be killed by torturing if he refused to sign the document.”

His son will appear in Maungdaw distract court on May 27 after completing three time rounds of remand, two times for 14 days and one time for 7 days, and total of 47 days in detention.

“He will be charged with 50 (Ka), terrorist acts,” the father said.

U Tun Hla Oo met local lawmaker U Maung Oo and State Parliament Chairman U San Kyaw Hla and requested for help his son’s freedom. He told both lawmakers his son was innocent and got wrongful arrest.

Maung Kyaw Thein will not be an exception.

All these men will be delivered guilty verdicts and imprisoned for long term.

Unusual and cruel punishments, including extra judicial killings and arbitrary arrests, are executed on Rakhine people under the pretexts of connections and acts of terrorist activities by the government and military.
Newer Post Older Post Home