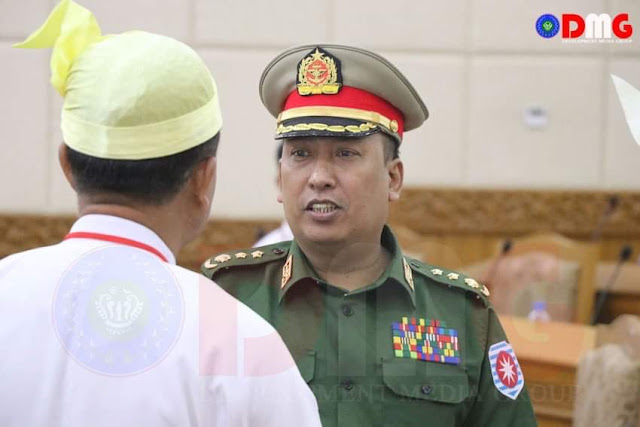 Lawmakers including members of NLD and Tatmadaw, the military, discussed variety of issues ranging from the brutal torture of five civilians on the navy ship to lifting restrictions on relief works and international organization assistances to internally displaced persons, IDPs. But all resolutions passed by the parliament end in the hand of very powerful Colonel Min Thaik, Minister for of Border and Security Affair in Rakhine State.

Local observers and analysts have reported Col. Min Thaik is a hardliner, and a vacuum of every aspect of powers in short period of time he maneuvers, and now he is even above the state chief minister.

Ponanygun township’s lawmaker U Aung Than Tin questioned Col. Min Thaik during the parliamentary session whether there was any legal ground to take out detainees from the police by the military personals from Ponnaygun base Light Infantry Battalion 550 when the five accused—appeared cruel torturing on social media and went on video viral on May 10—have already filed at the court in the town.

The colonel replied it was legal because northern Rakhine state is on the war and the penal code 156 (1) and (2) applies to collect evidences of terrorists and corporation with the police to arrest the suspects.

Myanmar military admitted mishandling of the accused and promised to punish the security forces that involved in the brutal torturing. The promise has been silent, but the accused have been filed with terrorist laws by a military officer at the district court in Sittway since May 22. Their next court appearance schedule is on June 6.

But legal expert points out the military colonel misinterpreted the penal code 156.

The legal expert Thar Hla Aung* said the penal code 156 and its sub articles clearly state only the judge of the criminal court has sole authority and jurisdiction to transfer the accused to another department for further investigation but on the presence of the police officer who originally handles the case. In addition, the penal code 156 and section (2) explains the power of the case and handling police officer’s jurisdiction, and it states that none of alien investigators can discharge the standing police officer for another extended investigation by a new alienated officer for different entity.

Colonel Min Thaik signed on an order form on behalf of Chief Minister U Nyi Pu and released it on social media in April to strop and remove a makeshift IDP camp building by local charity organizations in Minbya township.

Arakan Information Center investigated the order of the camp removal and got confirmation that the state government did not sign the order but the colonel himself, according to the charity organizations.

Woman lawmaker Daw Khin Saw Way negotiated with the colonel to withdraw the order. After that the camp construction is continuing.

Rakhine parliament passed a resolution to lift restrictions on providing assistances to the IDPs by both national and international organizations and gave more supports to the state government for helping the IDPs.

However, local businessmen reported goods delivery from Yangon to Sittway and townships to townships in terms of trading requires signatures from Colonel Min Thaik. This new rule is not yet formally approved by the state government but the colonel himself.

“Now we are facing very hardship of economy in our state. We cannot send goods to Yangon from Sittway and from Yangon to Sittway freely as well as from townships to townships. We need his signature,” Maung Boriza* said.

In Rakhine state every aspect of social, economic, freedom of movements, and civil administrations are paralyzed under the military control government. Local people predict more hardships are coming ahead in the monsoon season.