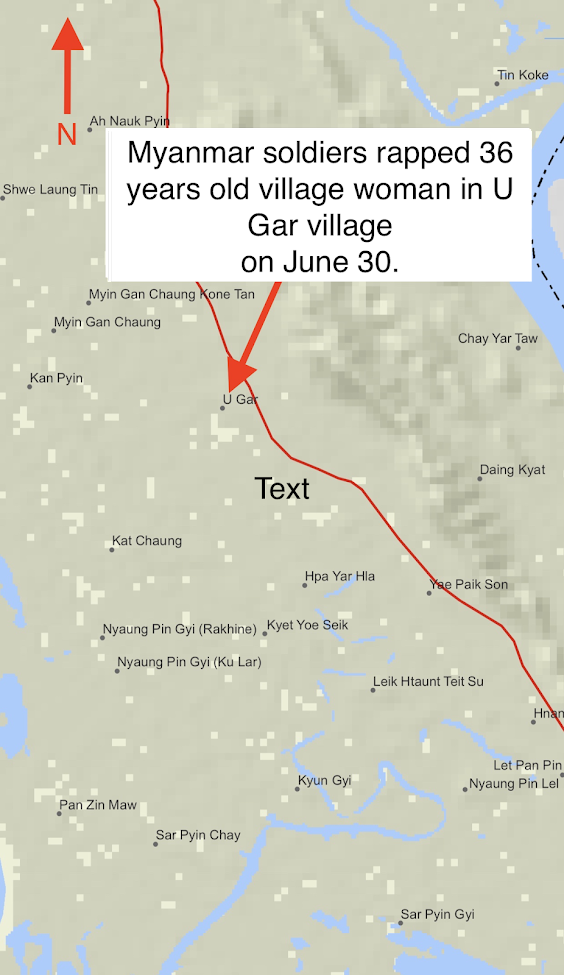 Our news reporters manage to talk to her this morning. She said the soldiers are still remaining in the village and shooting the guns when we are talking to her and during this news is writing.

Here are her own accounts of rapped by the Myanmar soldiers:

Four soldiers come into our house, and it is about 11 pm and very dark. Six of us, my father in law, mother in law, my daughter and her 5 months old baby, two of my aunts, and myself are laying down in the bomb shelter under the house. My daughter’s baby starts crying. Then the soldiers are alerted and call us to come out from the bunker by gun points and force us sit on the ground under very gleamed light.

The soldiers, four of them waring civilian dresses, search the house first and then ask many questions including whether we see AA fighters in in the village. We answer we do not know anything about it. Then they ask me where my husband is. I tell them my husband is working in Thailand.

Then they ask me to see my national ID. I show it to them. They tell me I must be AA member. I say I have four children, two of my daughters are with me. The youngest daughter is 3 years old. How I can be member of AA. They tell me they don’t believe me and need to ask some important questions for one on one. They just make up the suspect story to rape me.

Then they take me to the hut in the same compound. It is dark in the hut. They say if I yell for helps, they will shoot and kill me. They tell me to be quiet. First, one solider rape me. Then next one, and the last one. Another soldier is guarding outside the hut. I am scare. I feel I am dying.

They tell me if I tell people they rape me, I will be shot and killed.

After they raped me, they take me go back to the house. They ask my daughter to come along with them. My father in law and my mother in law and myself protest and tell them she just gave birth and has a five days new born infant. They are angry and leave from the house after a few minutes.

She tells me our news her 16 years old son and 14 years old daughter are away from home when she is rapped, and they are living with their uncle and going to school in Sittway.

U Gar village has 400 houses and 2,000 residents. Some are fleeing since the clearance operation has started on June 24 in that areas, but government does not make any official announcement. Some villagers are remaining in the village.

She said the soldiers searched many houses and took valuable private properties and looted beers and grocery stocks from some shops. They also killed chickens and ate. They forced some villagers to provide rice and other food stuffs for their rations.

She and her daughter are worrying they will rape them again tonight.

*Her original name is changed for her safety.