Fighting between Arakan Army and Myanmar army is continuing near Aung Thar Zay village since 8 am this morning.

Three hundred Myanmar troops have been attacking Arakan Army positions in the hill near Aung Thar Zay village since yesterday morning. It lasted 7 hours and briefly halt the attack last night after 9 pm.

Artilleries are firing to the hill, Kyauk Tan, and Aung Thar Zay villages from different locations of Myanmar military bases in Htee Swea, Yae Soe Chaung, and Rathedaung for more than 500 rounds since early dawn.

A villager from Thaung Da Rar village said, “The fighting sparked in the very early dawn and stopped it briefly. They are fighting again at 8 am this morning. They are exchanging gunfire and shelling in close range near Pyin Ti hill. Myanmar ground troops are trying to cross the road and to seize the hill. They cannot advance the hill but meet with the AA’s heavy defense lines.”

“Our Arakan Army has been declaring unilateral ceasefire until August 31. To honor it, we don’t attack Myanmar army positions. But they are attacking us by using excessive forces of navy, air, and ground troops today and yesterday. We have no choice, we are defending our positions,” he said.

Local residents from Kyauk Tan  reported 3 villagers were injured yesterday when they were working in the farms and after 70 rounds of shells landed near the village and in the farms.

U Maung Hla, 46, were wounded in his knee. Fifty years old U Kyaw Than’s arm was hit by shell, and bullet went into 40 years old U Maung Kyaw Hla’s stomach yesterday.

The villagers said 50 people have been trapped inside the village.

State ran newspapers wrote an article that the military is attempting to retake roads in Rathedaung and Ponnaygun townships where AA has been controlling.

Khine Thu Kha said the army just made a showcase to the public and international community it had withdrew the operation in Kyauk Tan after international community protested. But the military is covertly conducting the clearance operations again Kyauk Tan village track and in the west of Rathedaung township where over 3,000 fresh refugees are fleeing from several villages along the highway from Ah Ngu Maw to Koe Tan Kouk villages.

He said, “At least 20 Myanmar troops were killed and injured yesterday fighting. They briefly withdrew in the evening. They are regrouped and attacking our positions again this morning. We will defend ourselves as best as we can.”

Analysts said Myanmar army is attacking AA positions near Aung Thar Zay village in these days when the sky is clear and air force and artillery firepower can be supporting the ground troops.

The analysts said the government troops are very weak when AA skill fighters are outnumbers in Kyauk Tan region. But the military has more artillery firepower. For the long run, the question remains how long AA can hold its defense lines in the region.

Local observers predict that if more than 200 Myanmar troops are killed during this heavy raining season and in the recent operations, the answer is clear AA is fully controlling northern parts of Rathedaung township.

They said this is position shifting operation and defense line expansion war between Myanmar army and Arakan Army in the Kyauk Tan region.

Police are arresting three students protesters in front of the government office in Sittway on September 9. AN. Sittway. September 9, 20... 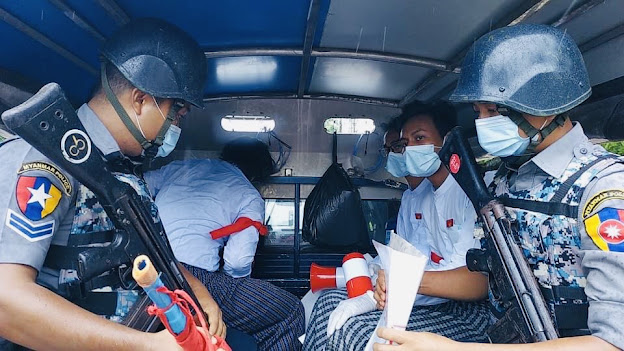