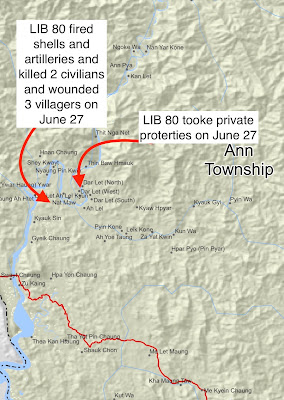 Local people reported soldiers from Light Infantry Battalion 80 under Ann based Light Infantry Division 66 confiscated private property and estimated value of 13,000,00 Kyats (8,000) US dollars from a villager in Dar Let West at 8 am on June 27.

Fifty soldiers from LIB 80 entered into Dar Let (West) village in the morning and broke the door of Toe Toe Htwe’s house and took a jade Buddha image, a TV, a solar plate, a video player, a washing machine, a computer, an electric motor machine, a battery, a safe box, two bangs of ground nuts, clothing, and some more personal belongings.

Toe Toe Htwe told our news agency he and his family were away from home when the soldiers broke his house and took the properties. He and his family have been away from the home for a couple months and helping relative business in another village.

“I was away from home when the soldiers broke our home and took all properties. I have been living and helping my brother business in another village for a couple months. I don’t know why they were breaking my house and taking all our belongings,” he said.

Local people reported LID 66 has set up an artillery base near the village since last summer.

He said, “I think the soldiers might be taking TV, video player, the electric motor machine, battery, and computer for their own use in the base.”

He said he filed police report over the illegal seizure of personal properties but little hope.

He said, “Nobody wants to touch and complain the soldiers. They have supreme power in the region.”

The same soldiers of LIB 80 fired shells and artilleries into Dar Let Nat Maw village on June 27 and killed two civilians and wounded 3 villagers including a two years old girl.

Dar Let West is located one mile to westward of Dar Let Nat Maw, and Myanmar army is suspecting AA fighters are penetrating into the region.

Hundreds of government soldiers have been patrolling, searching villagers, firing guns and shells to the villages in the region since last December.