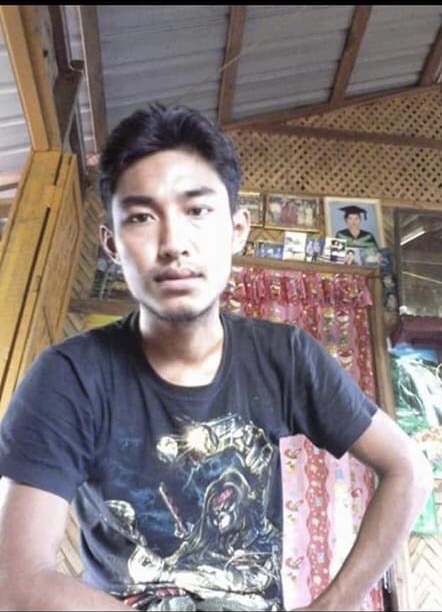 A column of soldiers about 166 yards distance from the police station and 200 yards from the town administration office and close to the city electric generator station and municipal office encountered the motorbike riding two men from opposite direction to the south while the soldiers heading to the north on the road. Then the soldiers opened fire guns to the motorbike and hit the residents. They immediately fell down on the road.

His father U Thein Maung said, “My son got several shots on both legs and wounded badly. Both legs were crashed and all bones were broken and loosely. The wounded holes on the legs were wide and bleeding.”

“My son did not die on the spot. The soldiers beat him constantly with the refile-buds and then stabbed by bayonets like cutting meat pieces until he died. On his body and head there were full of black-marks wound and inflammations,” he said.

“I am very sad. This is inhumanly killing and barbaric. My son is no longer with us; he is gone for nothing. I want the truth; I want justice; I want to see the murders bringing to justice. But we are voiceless. We cannot say nothing. Where I should go to complaint this lawless killing of my son. Who will take responsibility for it,” The father said.

Than Tun was shot and stabbed and killed along with his friend in the town last night. His brother, Thein Tun Oo, explains how his brother was killed and what he feels about it.

“It was over 8 PM. My brother and his friend went back to his wife residence.  He was newlywed. On the way to home, the soldiers shot them in the south side ward in town and near the electric generator compound. When we took him and his friend to the hospital, they already died.  it was about 9 o’clock," Thein Sun Oo said.

The brother explained, “His throat was completely cut-off. His legs got very wide wounds; all bones were broken and the legs were very loosely. His face was seen very inflammatory.”

“I am very angry. I am not satisfied for this senseless killing. I want the truth and justice. I want the leaders and the world to stop this kind of inhuman killing. It will never end; entire people will be killed like my brother if higher authorities do not stop the government security forces lawless killing. We are poor and uneducated people. We live hand-to-mouth. We need your helps,” He said.

Villagers from Naram in Minbya township reported U San Kyaw, 61, was also shot and killed in Raram village by the government security personals yesterday.

US State Department Spokesperson Morgan Ortagus said on his statement the US condemns WHO’s employee died by the gunshot and reiterates for ceasefire in Rakhine State.
Newer Post Older Post Home