Arakan Information Center (AiC) office has been opened in Kuala Lumpur, Malaysia. since April 2019. It is our pleasure to inform you that we are keen to working with you in Asia regions for exchange of idea and sharing information, and working together for awareness of human rights abuses, war crimes, IDPs, refugees, and wars in Rakhine State, Myanmar.

You are pleased to feel free to contact us. We will do our best to provide you advices and services based on our ground information, researches, and eyewitness accounts.

Mission
It is a volunteer association of gathering and sharing news information and exchange of idea. AiC team is comprised with IT experts, on-ground volunteer reporters, and legal advocates from Arakan State, Australia, Canada, Korean, Japan, Europe, and The United States of America.  This news agency has been established since 2005 under the blogger: Arakan-Ynnan Gas Pipeline Campaign. It extends to Face Page Arakan Information Center ( AIC) recently and Arakan News webpage.

Target
Our news and information is targeted to local people, ethnic community, Burman communities, media, international organizations, United Nations, and world leaders. We have 150,000 subscribers and followers. At this moment, our team and news information is reaching to a half million readers and followers, combined with Face Page, Instagram, Twitters, and Bloggers, and Webpage.

AIC is also constructing a Face-Com where everyone can read, share news, and post. It is more likely to be Facebook style where subscribers can create their own Face-Com page.

Remarks
President Office Spokesperson U Zaw Hay admitted during his previous press conference that Tatamadaw could not affectively carry out its counter insurgent operations in Rakhine State as it wishes to because of internet and cyber networks mechanism and news sharing among the people and international organizations. Our AIC is key leading online media to encourage Rakhine people to share news and information among the people and to the world.

International media, UN organizations, academics, students, and some governmental organizations have been contacting us regularly and sharing information and providing advices. 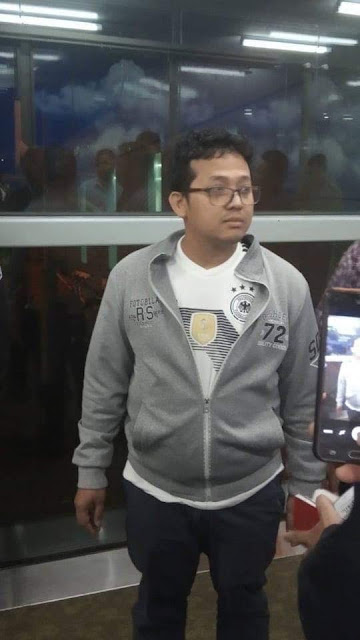 Summary:
Myanmar government has shut down internet for more than one month. During the periods of 34 days blackout, 6 civilians are killed; 27 civilians are injured, including gunshot, ferry boat sinking, and landmine explosions; 26 villagers get arrested; 4 villages burned down; several people are missing; 9,042 refugees take shelters in IDP camps; 9,000 people are affected by water flood; due to the water flooding, 30 houses damaged, 22 cows died, and 70,000 acres of farmland damaged and male-cultivations.

Rationale:
Myanmar government has been shut down internet in nine townships in Chin and Rakhine states since June 21, 2019. It is blackout and as of locking up millions of people in a darkroom and cutting connection with families, friends, and the world. It changes life style and communication.

Background of Internet Shutdown:
Myanmar’s Ministry of Transport and Telecommunication bans internet connection in 8 townships of war affected zones in Rakhine State and Paletwa township in Shin State on June 21, 2019.


Major Impact on Internet Shutdown:
News and information sharing among the people in Rakhine and Chin states who live in war and conflict zones are impact on:
1.     Communicating each other locally and internationally.
2.     Humanitarian relief effort for 50,000 IDPs.
3.     Donation gathering cash and materials from Rakhine community organizations and individual that are located in mainland Myanmar and overseas.
4.     Natural disaster, storm warning, and water flooding warning.
5.     Earlier warning of weather and natural disasters.
6.     Money transferring to families from workers of oversea and of mainland Myanmar through wire and mobile transferring. (About a half million of young men and women working in China, Malaysia, and Thailand as well as Yangon and other states have difficulty to transfer cash to their families).
7.     Slower to report of military clashes and refugees run away from villages in amid of clashing.
8.     Slower to report of arrests and torture on civilians.
9.     Slower to report human rights abuses.
10.  People feel fear of the lengthy of the internet shut down.

Efforts to Restoration internet:
1.      Rakhine parliament passed a resolution to restore internet in Rakhine State on June 24, 2019. The state parliament decided that the internet shutdown affected on people and worried more human rights violation may be taken places during the blackout, including online and mobile money transferring from their sons and daughters who work in Yangon and oversea and inert-state trading and communication with families via online connection.
2.     US and UN have been calling to restore internet services in Rakhine in the last week of June.
3.     Rakhine law maker Daw Khin Saw Way proposed lower house parliament in Naypyitaw to restore internet services in Rakhine State on July 17, 2019. But the Speaker of the parliament rejected her proposal in the house session on July 18, 2019.

Death, Arrests, Refugees, and Natural Disaster Affected after Internet Shutdown:
1.     June 21: Police bring 56 arrested to court in Sittway, capital city of Rakhine. They all are from four townships. 3 from Minbya township; 24 from Lakkar, Mrauk U, 5 from Outthakan, Mrauk U, 12 from Chung Daung village and Kyaung Taung village, 2 monks and 3 arrested from Kyautaw township, and 8 from Kyauk Tan, Rathidaung township.
2.     June 22: Fighting broke out between AA and MA near Shwe Kyin village, Minbya township. 508 villagers from Shwe Kyin and Tharzy villages run away due to the fighting. On the same day, a navy ship was attacked by AA in near Sark Ri Kya creek, capital city of Rakhine state. Police arrested nine men and a woman in different times as suspects.  Seven arrested are Soe Htay Aung Naing, Khin Nyat Lin, Tun Shwe, Daw Thuzar, Ye Min Naing, Aung Lin Oo, and Aung Naing.

On July 21, U Tun Maung, 40, steps on a land mine and injured his led when he goes to his firm to collect foods in Htun Bu village, Pannaygun township, at 9 AM. He is taken to Sittway Hospital.

3.     June 23: U San Thar Aung,45, is shot dead in Gokpi village, Buthidaung township, at 5PM by unknown gunman. He has family and shopkeeper and a Mro ethnic man.
4.     June 24: Nay Myo Tun,20, is killed by torture of Myanmar soldiers and pass his death body to Kyauktaw hospital. He and his friend Kyaw Hla Thein and Zaw Win Oo, who do carpenter works and renovate pagoda in Wetherli village, Mrauk U township on June 20, 2019.
5.     June 24: A bus with 30 passengers get an accident and 21 injured when it goes to Ann township at 7 AM.
6.     June 26: Maung Soe Naing, 25, Maung Tun Tun, 20, and Maung Kyan Lu, 28, are arrested by police in Kayu Chung Buddhist temple of temporary IDP camp. They are suspected in the shooting of navy ship near Sittway.

On the same day, when 5 arrested are brought to the court in Sittway, family find suspects are severely beaten and tortured. Maung Myo Hein Swe, 18, and Maung Soe Than Maung,22 are severely injured.
Win Maung, 32, is hit by bullet when he is feeding his cows near the Mahamuni village, Kyawtaw township. AA and MA is fighting near the village at 9 AM.

Five hundred villagers run away from Sin Thee village, Pannaygun township, after AA and MA are fighting near the village.
7.     June 27: 2000 villagers from Paw Hree Pyin village, Pannaygun township, run away from the villages due to clashes between AA and MA near the village.
8.     June 28: ICRC truck loaded with foods are hit by mine explosion near Kyauktaw township. No one injured but one of trucks is damaged slightly.
9.     June 29: Seven villager chairmen from Kyauktaw township resigned from their posts due to lack of protections. 14 Chairman have already resigned yesterday as well.

Over one thousand villagers from Kyauk Tan and Lingone villages, Rathidaung township, run away when shells are landed nearby the villages.
10.  June 30: A H1N1 sick person is found in Sittway Hospital, Rakhine state.
11.  July 1: Maung Zaw Win Hlaing,18, passed away at Sittway hospital after he admitted at the hospital due of severe injuries of Myanmar soldier torturing.

Over 3,000 IDPs in San Bo Kyi IDP camp severely affected by water blooding. They cannot move to another camp because of no roots in new huts they have built up.

Seven suspects who have been arrested in suspicious on Navy shooting are brought to court in Sittway. Three are given bills and released: Maung Soe Naing Lin, 25, Maung Tun Tun, 20, and Maung Kyin Lu, 28.

Police and soldiers search a Buddhist temple in Kyawtaw town. 16
16.  July 7: Police arrest thee men in Dattaw village in Ann township, including brother in law of AA Spokesperson Khin Thu Kha. They are Maung Phu Than, U San Aung Kyaw, and U Ray Bo Thu. They are suspected of previous bomb explosion near the village.

17.  July 8: U Kyaw Sein is shot and killed by unknown gunman at his resident in Myauk Taung village, Kyauktaw township.

A boat loaded with 60 Rohingya are arrested by police neat Maungdaw Town. That is about to headed to Malaysia.

A mine explodes near Gisspa Nadi Bridge near Kyauktaw town at 8 AM.

A fishing boat is sunk in the sea from Thawin Chung village, Pauktaw township. U Aung Than Tin (57) and U Aung Htay Win (25) are missing.

Myanmar army seals of Ken Pyin village and interrogate every villager. The villagers are forced to stay at the Buddhist temple. Only 8 persons are allowed to go to village and cook the foods; after the 8 returns, they can eat the food. They are forced to sleep in the temple.
20.  July 11: Mrauk U and Minbya township areas are affected for water flooding. Some IDP camps are affected.

Kyaw Myint, Min Naing Htay, Maung Oo Nyin Way are arrested by Myanmar soldiers near Kyauktaw township at 9 PM. Myanmar army next day arrest Amung Tun Win and Maung Than Swe in Yawta Yoke village, Pannaygun township. They are suspected for having connection with AA.
27.  July 17: Three out of four young Arakanese are released from custody. They are accused of killing a Myanmar army spy. Ko Aung Zaw Lin, Ko Khine Bo Bo, and Ko May Yu Tun are released, but Ko Ye Kyaw Thu is formely charged with murder case.  Singapore, Malaysia, and China joine business teams meet Rakhine State Chief minister U Nyi Pu and discuss to invest billions dollar worth projects in Rakhine state after six Arakaense are deported from Singapore. The deportees are arrested in Myanmar on July 11. Border and Security Minister of Rkhine State Col. Phone Tint is replaced with Col. Min Thile. Arakanese and ethnic people protest in Japan and condemn Singapore government that deport six Arakanese to Myanmar.
28.  July 18:  Severe water flood affect 9,000 villagers and evacuation; 30 houses damages, and 22 cows died. Over 70,000 acres of farms and cultivations are damaged due to water flooding. Rakhine law maker Daw Khin Soe Way’s motion to lower house in Naypyitaw to restore internet in Rakhine State is rejected by Speaker of Upper and Lower Houses in Myanmar. A homemade mine is found on the second floor of Mrauk U ancient pagoda.
29.  July 19: a Mro ethnic woman Ma Khin Soe Ye, 31, is hit by landmine Nghapyaw Chung village, Kyawtaw township. When she goes to forest, one mile away from her village, to collect vegetables at 12 PM, the mine explodes and injured. She is taken to Kyauktaw hospital. 56 arrested villagers are brought to court in Sittway. Many detainees are found severely wounded by tortured during in the custody.
30.  July 20: Police in Sittway interrogate charity workers who collect donations to IDPs.
31.  July 22: U Maung San Aye,52, is arrested by Myanmar army in Dandung Yaw village, Kyauktaw township, who possesses handmade guns.
2,000 villagers run away from Pauktoo Daung and nearby villages where AA attacked Myanmar navy on July 19.

Finishing station with 8 houses is burned down by Myanamr army in Kyaut Maw village near Kyau Taw tract in Maybon township after Aarakan Army attacked 3 navy ships and 3 navy officers and one private were killed.

Muslim boy namely Del Marmud, 14, is injured by artillery shells in U Yin Thar village, Buthidaung township. Shells hit on several houses in the village while fighting between AA and MA.

Fishermen from Muzay Island in Ramree Island is stopped finishing by Myanmar army.

First Time Ever, Karen Ethnic Armed Force Criticizes Myanmar Government for Designating Arakan Army As Terrorist Organization but Urges the Government to Have Dialogue with AA 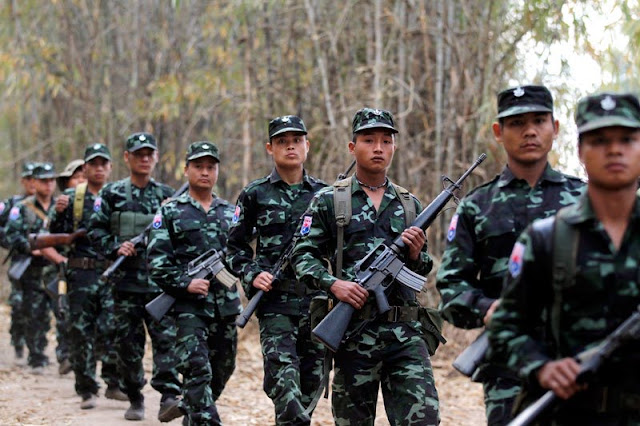